Why supplement with Mangosteen?

To effect a balanced metabolism in the body and achieve a delicate equilibrium of metabolic hormones, mangosteen benefits are a well-balanced multi-vitamin program with antioxidant support.

Vitalxan has a full complement of polyphenols, xanthones, (antioxidants,) vitamins and minerals in our newly released “Whole Fruit Mangosteen powder available in capsules. 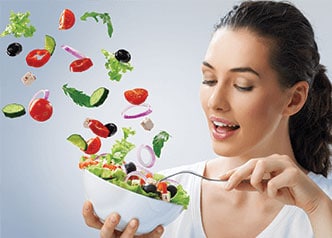 Studies, performed by the Agricultural Research Service, Human Nutrition Centre for The Aging, USA, concluded that foods scoring high in ORAC may protect cells from oxidative damage. ARC’s Administrator, Floyd Horn stated, “Many people may be able to reduce their risk of disease by simply adding ORAC foods into their diets”. The study concluded, “Eating ORAC foods raised the antioxidant power of the human blood by 10-25%.” Studies show the average person consumes only 1,200 ORAC units daily.

The USDA recommends 3,000-5,000 units of ORAC daily. This equates to 3-5 servings of vegetables per day, however, this may not be enough. Over-processing of foods, aggressive farming practices (chemicals), deplete the nutrient levels of soil, and the food grown in it. Aficionados in fruit and vegetables, often result in inadequate ORAC levels. 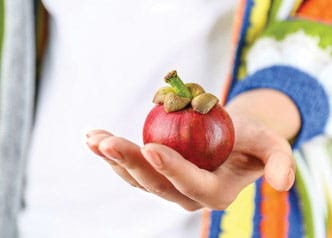 Mangosteen is one of the most popular tropical fruits, containing an impressive list of essential nutrients and antioxidants for overall well being. Mangosteen revered as the queen of Fruits’. low in calories, rich in fibre, Xanthones – (super strength antioxidants) and contains no saturated fats or cholesterol.

A good source of B complex vitamins such as Thiamine, Niacin, and Foliates. These vitamins act as co-factors to help the body metabolize carbohydrates, proteins, and fats. Mangosteen contains minerals like potassium, manganese, and magnesium. All beneficial for overall health.

The Vitalxan proprietary Mangosteen powder is very strong in polyphenols with a reading of 28.76% against our nearest competitor at 8.9%.

The polyphenols and catechins are proving to be a strong active ingredient in the Vitalxan mangosteen product. 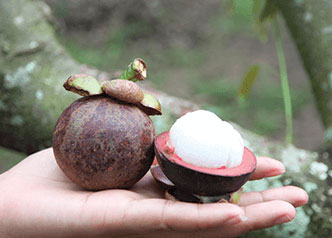 ORAC | Oxygen Radical Absorbance Capacity is the international testing guideline that measures the total antioxidant power of any foods.

Vitalxan has been developed, with a certified antioxidant score measuring 3,365 gm.

The testing was completed at The National Measurement Institute Melbourne,a government facility

Health-conscious ORAC consumers compliment their diet with a high-ORAC supplement. Check the ORAC value on the label, and more importantly, if the ORAC value is certified by an approved independent Laboratory.

Keep in mind, synthetic material does not have the same benefit as natural food.

The best high-ORAC supplements list ‘only real foods’ on the ingredient list and naturally high ORAC nutrients, which are easily absorbed and used by the body.

Vitalxan Mangosteen Tablets are tested and certified ‘Free’ of heavy metals, pesticides and chemicals. This product is Lactose and Gluten-Free. Vegetarian Capsules.

Vitalxan is Made in Ballina NSW.

The Vitalxan proprietary Mangosteen fruit powder has been used in several double-blind human trials over the last few years that set a standard for the quality necessary for additional human research. Vitalxan Mangosteen powder has discovered a process that unlocks an elevated Polyphenol content against other powders on the market.

Mangosteen (Garcinia mangostana), as used in Mangosteen Tablets, also called the purple mangosteen, is actually a tropical evergreen shrub with edible fruit native to island states of south east Asia and Thailand. Its source is unclear as a result of widespread ancient cultivation. It develops mainly in southeast Asia, southwest India and other tropical regions like Colombia, Puerto Rico and Florida, where the shrub was introduced. The fruit of the mangosteen is salty and sweet, succulent, slightly fibrous, using fluid-filled vesicles (such as the flesh of citrus fruits), with an abysmal, deep reddish-purple colored rind (exocarp) if mature.

Mangosteen is owned by the same genus because one different, less well regarded good fresh fruit, like the button mangosteen (G. prainiana) and also perhaps the charichuelo (G. madruno).

In food treatment, mangosteen is known as”heating”, making it a fantastic counterbalance to the”heaty” durian. There is also a legend regarding Queen Victoria that offer a benefit of 100 pounds sterling to anyone who might send to her fruit. Even though this legend could be tracked to a 1930 publication by the new fruit explorer David Fairchild, it’s not substantiated with any famous historic record.

The author and R. W. Apple, Jr. once said of this new fruit,”No additional fresh fruit, for me personally, is therefore thrillingly, intoxicatingly luscious…I’d rather eat a hot fudge sundae, which for a sizable Ohio boy says much” Since 2006, private small-volume requests for veggies increased in Puerto Rico were sold to Western specialty food stores and gourmet restaurants that serve the flesh segments as being a delicacy dessert.

Mangosteen creates a recalcitrant seed that’s not just a legitimate seed rigorously characterized, but instead described being a nucellar parasite that’s senile. If permitted to wash, a seed expires quickly, however if saturated, seed germination occurs between 14 and 21 days once the plant might be kept at a nursery for approximately two years growing in a little shade.

Once the trees have been approximately 25–30 cm (10–12 in) they are transplanted into the field in a projection of 20–40 m (66–131 feet). After planting the field will be mulched to have the ability to control weeds. Transplanting occurs at the rainy season because trees will be highly likely to become damaged by drought. Coconut palms are mostly utilised in areas with a long dry season, as palms also provide colour for older mangosteen trees. Still another benefit of intercropping from mangosteen farming is that the reduction of weeds.

The increase of those trees will be retarded while the temperature is below 20 °C (6-8 °F). The ideal temperature range for growing and producing meals is 25–3-5 °C (77–9-5 °F) using a relative humidity more than 80%. Young seedlings prefer to have a high-level of colour and trees that are mature really are shade tolerant.

Mangosteen trees desire a nicely spread rain over the entire year (<40 mm/month) and also a 3–5 week warm season. Mangosteen benefits trees are somewhat sensitive to water accessibility and use of compost enter that’s raised with age of trees, regardless of region. Maturation of mangosteen veggies takes 5–a couple weeks, together with harvest occurring once the pericarps have been purple. Most the genetic tools for breeding come at germplasm collections, where as many uncontrolled species have been cultivated in Malaysia and the Philippines. Conservation techniques are preferred since the utilization of seeds under dehydrated and very low temperature states has not been successful. Because of the very long run, before trees go back the long consequent breeding cycles, mangosteen breeding hasn’t yet shown attractive for pruning or research. Breeding objectives that could enhance mangosteen production incorporate Drought tolerance, especially sensitivity to drought at first five years after germination Tree structure to make a tree using a crown that’s regular and pyramid-shaped fresh fruit quality by way of example I) beating bitter flavour components due to changes from pulp, and pericarp or aril and ii) pericarp breaking resulting in excess water uptake Root stock for enhanced adaptation to drought and strong development in early years of growth yield Mangosteen trees can attain fruit-bearing at as few as 6 years, but may possibly require 1-2 or years, based on farming and climate procedures. The return of this Mangosteen benefits, is changeable, based upon the age and climate of this shrub. In case the tree is posture for its very first time, 200–300 fruits could be generated, whereas, even in adulthood, 500 veggies a year are average. Presently 30 to 45 years at full adulthood, each tree could yield as much as 3,000 fruits, as well as trees as far as 100 decades still generating. Mangosteen manufacturing in Puerto Rico is equally succeeding. The diseases could be split into foliar, stem cells, and soil-borne ailments. Additionally the pathogen results in the veggies to rust before and following the harvest. Supplemental stem canker and die back are caused by the pathogen. A number of the indications of stem canker are branch dividing, gummosis bark and bark blistering. The principal areas where the disorder was detected are Thailand, Malaysia, and North Queensland. Another common disorder could be that the ribbon B Light or white ribbon blight disorder (Marasmiellus scandens) whereas the name stems from the mycelia that resemble ribbon. The supply of the uterus occurs through experience of contaminated lumber or thick rhizomorphs on tree stumps. There certainly are a couple of pests that prey mangosteen leaves and veggies for mangosteen shampoo for example foliage eater (Stictoptera sp.) . Notably in nurseries, the phase of the foliage eater can induce visible damage on young foliage but may also be treated with biological control agents. Feeds on various areas of the fresh fruit before ripening. Mangosteen, as used in Mangosteen Shampoo, shrub A tropical tree, the mangosteen has to be raised in always warm conditions, as experience of temperatures below 0 °C (3 2 °F) for lengthy intervals will typically kill a mature plant. They are known to recoup from short cold bouts quite well, frequently with damage merely to young development. Knowledgeable horticulturists have cultivated this species outside doors, also attracted them into orange from extreme south Florida. The juvenile mangosteen fruit, and this won’t want fertilization to shape (see agamospermy), first looks as mild white or green in the color of the blossom. As the fruit expands within the following 2-3 weeks, the exocarp colour reverted to green. During this interval, the fruit grows in size until its exocarp is only 6 –8 cm (2 1/2–3 ) in diameter, remaining hard before a final, sudden ripening stage. The subsurface chemistry of the mangosteen exocarp comprises a range of polyphenols, such as xanthones and tannins that guarantee astringency which elicits infestation by parasites, insects, plant bacteria, bacteria, and animal predation whereas the fruit is immature. Colour affects and softening of those exocarp are natural techniques of ripening which indicate that the new fruit could be eaten and also the seeds have ended developing. Once the growing Mangosteen Fruit, as used in Mangosteen Shampoo, has ceased expanding, chlorophyll synthesis decreases whilst another shade phase starts. Initially streaked with red, the exocarp pigmentation varies from green to reddish to purple, signalling your final ripening period. Within the days following removal from the tree, the exocarp hardens into an extent depending upon post-harvest managing and surrounding storage requirements, notably relative humidity levels. In the event the ambient humidity is raised, exocarp hardening might take a week or two more as soon as the flesh calibre is peaking and perfect for ingestion. But after a few additional days of storage, particularly if un-refrigerated the flesh in the new fruit could spoil with no obvious external signs. Employing the hardness of this rind being a indication of freshness into the very first fourteen days after crop is, consequently, undependable as the rind will not accurately disclose the interior affliction of the flesh. The amount of good fresh fruit segments contrasts with the assortment of stigma lobes over the exterior apex; consequently, a greater quantity of sections also contrasts with the shortest seeds. The group of wedge-shaped segments contains 4–8, infrequently 9 sections, the larger ones harbouring the apomictic seeds which can be unpalatable unless roasted. Just like a non-climacteric fresh fruit, chosen mangosteen doesn’t ripen farther, therefore needs to be absorbed right after harvest. Often known as a subtle delicacy that the plant conveys an excessively mild odour, quantitatively with about 1/400th of those compound components of fruits that were aromatic, explaining its comparative mildness. Nutritional posts the endocarp is that the snowy region of the fresh fruit comprising a moderate taste which produces the fresh fruit popular for ingestion.